OpenType and Apple fonts both provide contextual features. These are features which only take place in a given context and are essential for typesetting Indic and Arabic scripts. In OpenType a context is specified by a set of patterns that are tested against the glyph stream of a document. If a pattern matches then any substitutions it defines will be applied. In an Apple font, the context is specified by a state machine -- a mini program which parses and transforms the glyph stream.

Conditional features may involve substitutions, ligatures or kerning (and some more obscure behaviors). First I shall provide an example of a contextual substitution, later of contextual ligatures.

Instead of an Indic or Arabic example, let us take something I'm more familiar with, the problem of typesetting a latin script font where the letters ``b,'' ``o,'' ``v'' and ``w'' join their following letter near the x-height, while all other letters join near the baseline. Thus we need two variants for each glyph, one that joins (on the left) at the baseline (the default variant) and one which joins at the x-height. Let us call this second set of letters the ``high'' letters and name them ``a.high,'' ``b.high'' and so forth.

(You might wonder why I don't just have a class of all letters and use one rule instead of two? Because in this case all my classes must be disjoint, I mayn't have one glyph appearing in two classes).

The first thing we must do is create a simple substitution mapping each low letter to its high variant. This is a "Simple Substitution" lookup, but it will not be attached to any feature, instead it will be invoked by a contextual lookup. Let us call this lookup "high". We must (of course) create a subtable to go with our lookup, and we can use the [Default with Suffix:] button to fill it up with the high variants.

The tricky part is defining the context. This is done by defining yet another lookup, a contextual chaining lookup which should be associated with a 'calt' feature. And of course we want an associated subtable). This will pop up a series of dialogs to edit a contextual subtable 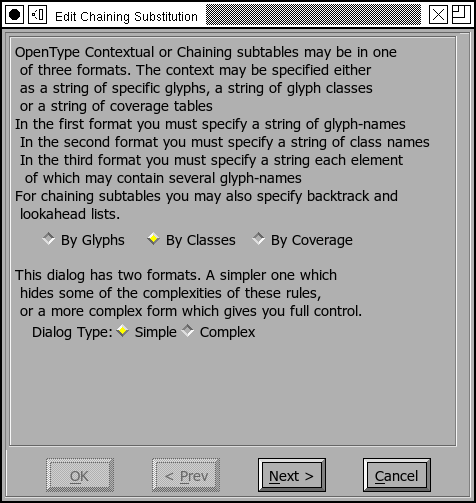 The first dialog allows you to specify the overall format of the substitution. We want a class based system -- we've already mentioned what the glyph classes will be. 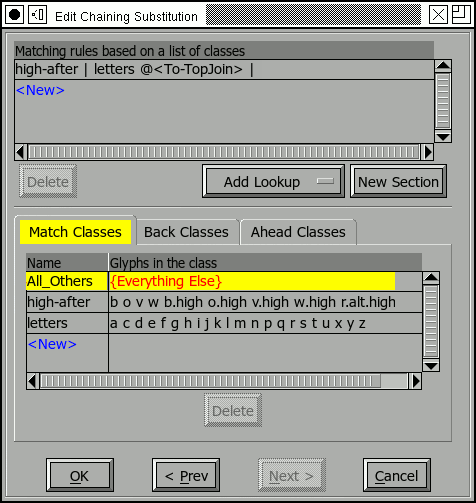 Each category of glyphs may divide glyphs into a different set of classes, but in this example we use the same classes for all categories (this makes it easier to convert the substitution to Apple's format). The first line (in the ``Matching rules'' field) should be read thus: If a backtracking glyph (the glyph before the current one) in class "high-after" is followed by the current glyph in class "letter", then that letter in the match string (that is the current glyph) should have simple substitution `To-TopJoin' applied to it.

If you look at the glyph class definitions you will see that class "high-afters" includes those glyphs which must be followed by a high variant, so this seems reasonable.

Now there should be a second line which would look like "high-after | high-after @<To-TopJoin> |" to handle the second case mentioned above. Unfortunately that doesn't seem to work. The OpenType spec allows for it, but implementations of OpenType don't seem to support it. Instead that line must be in a separate sub-table in the same lookup. To edit a glyph class simply click on it and type. To create a new one press the <New> button (at the bottom of the list). You can also click on the little box thingy off on the right. This produces another dialog showing a font view. You can select glyphs in the font view if that is easier than remembering their names.

You may edit a pattern in the obvious way. As you enter glyph names they will be auto completed for you. There are two buttons down at the bottom of the pattern list, one to start a new section (go from back tracking to active, or from active to lookahead), and one to add a new lookup reference.

A warning about contextual behavior: Not all software supports them. And even more confusing software may support them for some scripts and not for others.

Apple specifies a context with a finite state machine, which is essentially a tiny program that looks at the glyph stream and decides what substitutions to apply. Each state machine has a set of glyph class definitions (just as in the OpenType example), and a set of states. The process begins in state 0 at the start of the glyph stream. The computer determines what class the current glyph is in and then looks at the current state to see how it will behave when given input from that class. The behavior includes the ability to change to a different state, advancing the input to the next glyph, applying a substitution to either the current glyph or a previous one (the ``marked'' glyph).

Using the same example of a latin script font... We again need a simple substitution to convert each letter into its high alternate. The process is the same as it was for OpenType, and indeed we can use the same substitution. Again we divide the glyphs into three classes (Apple gives us some extra classes whether we want them or no, but conceptually we use the same three classes as in the OpenType example). We want a state machine with two states (again Apple gives us an extra state for free, but we shall ignore that), one is the start state (the base state -- where nothing changes), and the other is the state where we've just read a glyph from the ``bovw'' class. 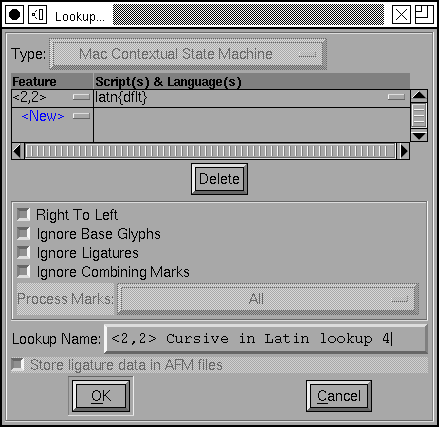 Apple Advanced Typography does not quite fit into the OpentType concepts of lookups and features, but it is close enough that I sort of force it to. So once again we create a GSUB lookup. This time the lookup type is "Mac Contextual State Machine", and the feature is actually a mac feature/setting, two numbers. When we create a new subtable of this type we get a state machine dialog, as shown below. 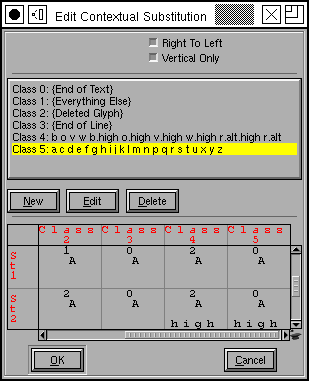 At the top of the dialog we see a set of class definitions, and at the bottom is a representation of the state machine itself. 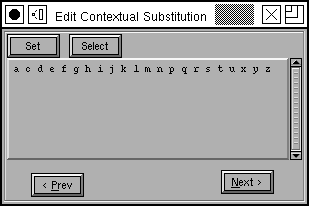 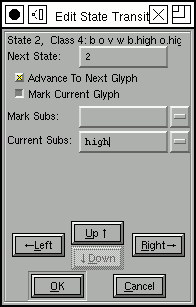 Clicking on a transition in the state machine (there is a transition for each state / class combination) produces a transition dialog. This controls how the state machine behaves when it is in a given state and receives a glyph in a given class. In this example it is in state 2 (which means it has already read a ``bovw'' glyph), and it has received a glyph in class 4 (which is another ``bovw'' glyph). In this case the next state will be state 2 again (we will have just read a new ``bovw'' glyph), read another glyph and apply the ``high'' substitution to the current glyph.

At the bottom of the dialog are a series of buttons that allow you to navigate through the transitions of the state machine.

Pressing [OK] many times will extract you from this chain of dialogs and add a new state machine to your font. 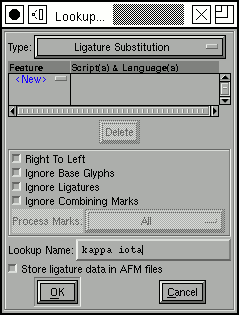 So the first thing to do is create the ligature itself. Add the glyph for U+03D7, and then create a ligature lookup and subtable (with Element->Font Info->Lookups) to bind U+03D7 to be a ligature of "kappa" and "iota". This lookup will never be used directly -- only under the control of another, a conditional feature -- so we don't give it a feature tag. 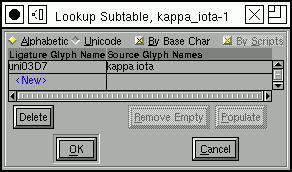 Next the conditional bit.

I'm going to use the notation <letters> to represent a class consisting of all greek letters.

(Now as I read the standard all these rules could be put into one subtable, and the font validation tools I have agree with me -- but the layout engines do not. The layout engines seem to insist that each rule live in its own subtable. This is inconvenient (the classes must be defined in each subtable) but it seems to work.)

These rules will be executed in order, and the first one that matches the input text will be the (one and only) rule applied. Consider these three strings,

all contain kappa and iota but each contains more letters around them, so none should be replaced by the ligature.

You might wonder why I don't just have one rule

It seems much simpler.

Now how do we convert these rules into a contextual lookup? 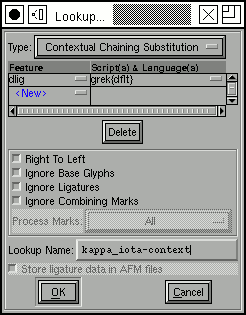 We use Element->Font Info->Lookups->Add Lookup to create a new contextual chaining lookup. This is the top level lookup and should be bound to a feature tag in the Greek script.

We have three rules, each rule lives in its own subtable, so we will create three subtables, one for each. The order in which these subtables n the Lookups pane is important because that is the order in which the rules they contain will be executed. We must insure that that final rule which actually invokes the ligature is the last one executed (and the last one in the list).

Once you have created your lookups you may test the result in the metrics view. 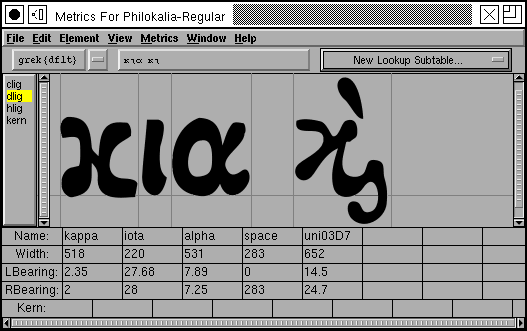 (This example was provided by Apostolos Syropoulos)